This project took a lot longer than I thought it would. I thought that decluttering books was a walk down memory lane, but decluttering photos was a definite look back to my early childhood into adulthood. Overwhelming, but also a sweet time to remember good times and good friendships. 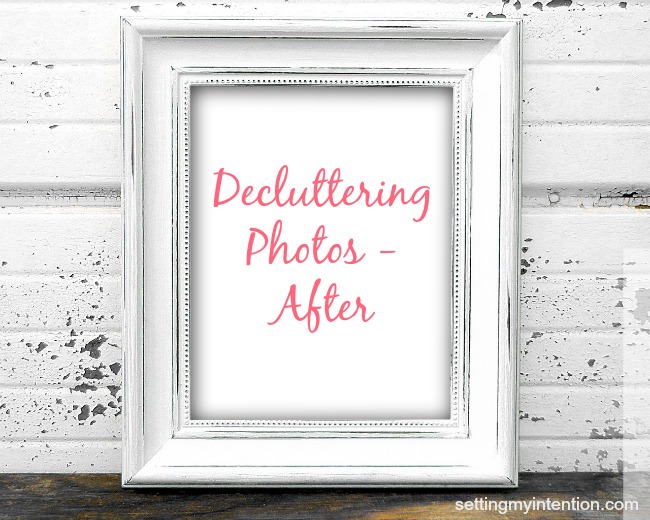 I am the last of three girls in my family. As all third children can probably understand, I have very few infant or toddler photos. As a parent of three boys, I completely understand how and why that happens – especially if they are close in age. This fact explains why I cherish any photos of when I was a baby or toddler with my family.

It was simple for me to put all my older family photos in an envelope with plans to have them scanned into digital format. It feels very precious to have those photos from a time when photos were not as easy to take and develop as they are now.

One of the first things I did was take out all of the photos from old photo albums that were bulky and decided whether I wanted to keep them and if yes, then which ones.

A couple of the photo albums I just threw out without taking the photos out of them. One was from a short-term summer mission trip in San Francisco. I have fond memories of that summer, but realize that I did not need to keep the photos in order to remember that time.

I went through the photos and put them in different envelopes based on trips or times in my life: childhood, junior high, high school, college, wedding, pre-kids, etc…I discarded all the doubles and all of the fuzzy photos that I have kept for some reason.

I included my junior high and high school yearbooks (yes – 6 years of yearbooks!) in the laundry basket of before photos. I thought it was going to be difficult to part with the yearbooks, but it was actually not a difficult decision to let go of them. I took photos of pages I wanted to remember, and the books themselves will go in the trash.

Before I went through the yearbooks, some advice I received suggested just keeping the senior year yearbook and getting rid of the rest. That seemed like a great compromise. However, as I went through the senior yearbook, I did not have the need to keep it. High school graduation was 25 years ago for me so there is definite distance between that time and the present. I have fond memories from high school, but I realized that the fond memories aren’t stirred by the yearbooks. The yearbooks actually reminded me of times I felt inadequate, awkward, or lonely.

I realized that I did not include my children’s baby photo albums in the “before” laundry basket. I kept those, but just went through them to see if there were duplicates that could be thrown away. Those are now in the kids rooms so they can look at them when they have the urge. They love to look at each other’s books and comment how “cute” they were as babies. 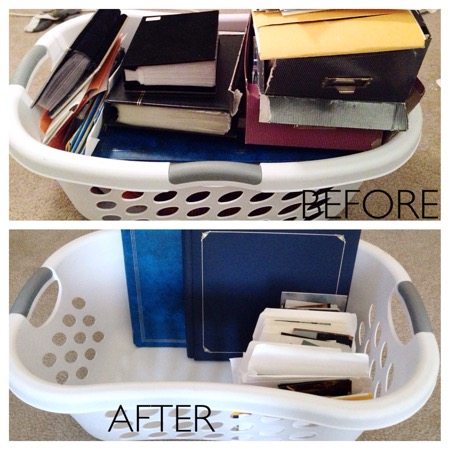 Living in the Present

One thing I am constantly asking myself during decluttering is “do I need this now” versus saving it “just in case” or “for the future.” It is an exercise in living in the present moment. Decluttering our photos has also been an exercise in living in the present. Looking back at childhood photos and yearbooks can create a rosier image of the past than it was while actually being experienced.

High school and college have shaped the person that I am today, but it is not a time that I want to be reliving constantly. I am trying to approach my photos from that perspective. Do I need 20 photos of the same friends, or can I pick out just a few that capture the spirit of the time?

Now that I have managed to reduce the pile significantly, I am planning on:

Have you edited photos? I would love to hear your process. Anyone have a digital photo frame they love?