You are here: Home / At Home / Decluttering Your Home / Cleaning Our Kitchen Corner Cabinet Turntable Thingy

My husband and I are slowly working through the basement clutter together and alone.  It’s a big project and is going to take some time.  I’m okay with that.

In the meantime, I wanted to tackle something relatively easy that I could do in one decluttering swoop!

I’ve been meaning to clean out our “lazy susan” for a while so I did that this morning. My feminist husband says that’s not the politically correct term anymore so I’m calling it the kitchen corner cabinet turntable thingy. It has a nice ring to it doesn’t it? 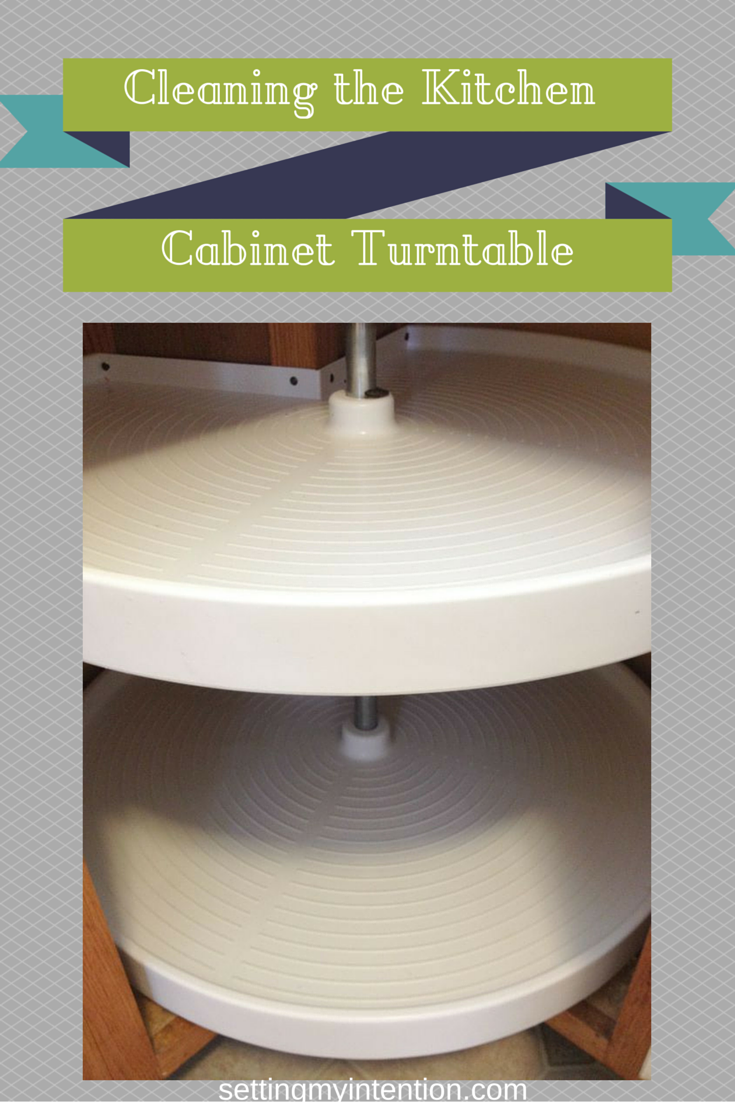 Before pictures of the Kitchen corner cabinet turntable

We have our oils, bowls, appliances, flours, oats, and pastas thrown in here. 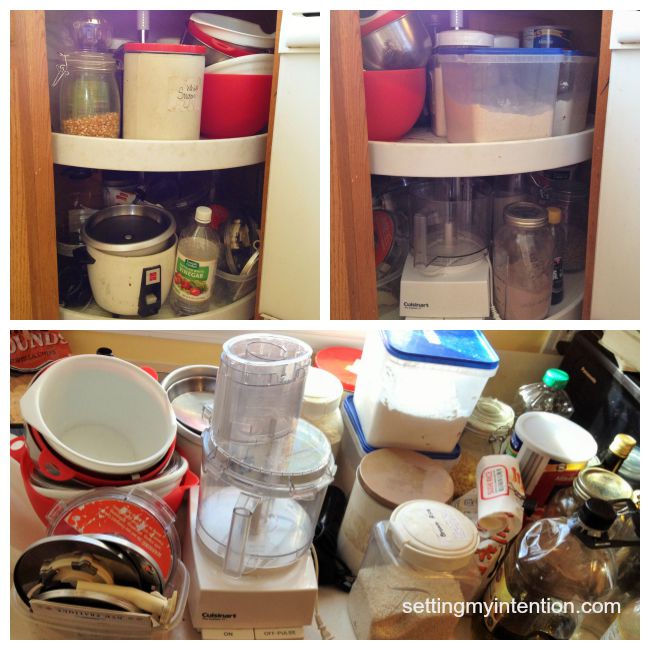 As in most decluttering projects, I pulled everything out. This was especially needed here so I could give the two shelves a good cleaning.

There were a couple of food items in there that I knew I wanted to throw away. At one time we thought we might make handmade tortillas so we bought the flour for it.

We quickly learned that:

They did taste very yummy, but the effort was not worth the end results. We haven’t used the flour for over a year so it was time to trash it.

The other food item was a container of a strange brand of rice that we bought by mistake. We have attempted to eat it. It is not good. It’s a watery sweet kind of rice that is mushy no matter how long you cook it.  Maybe it’s supposed to be for rice pudding? I think hubby bought it at the Asian market and thought it was our normal brand of sticky rice. Luckily, he didn’t buy a large bag!

I have a really hard time throwing food away, even if it was only a few dollars.

My RATIONALIZATIONS kick in:

Here’s how I talk to those rationalizations:

So, in the trash bag they go. I’m using the containers for the sugar and the sticky rice that IS edible. I’ve even labeled it with my beloved label maker.

After Pictures of the Kitchen Corner Cabinet turntable

I put all of the pantry/food items on the top shelf and the appliances on the bottom shelf. There aren’t wide open spaces in there but it’s not jam-packed like before. 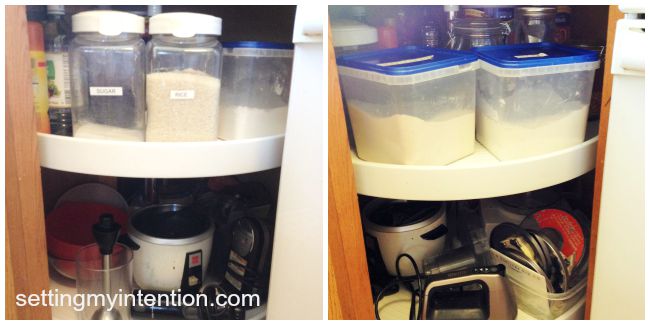 I decided I could give up some of my mixing bowls which we store in the kitchen corner cabinet turntable thingy. I think we can survive with 5 ranging in size from small to large. I decided to donate 3 of them. I also pulled our bread maker out of the basement to donate. We used it frequently for a while, but haven’t used it since we started making bread the No Knead way. It came from the thrift store, and back to the thrift store it shall go!

I rarely time myself during the decluttering projects that I do, but I’m going to start. Nony, over at a Slob Comes Clean, does this and it makes sense. Time yourself so that you know how long a task generally takes.

Our minds tend to exaggerate the amount of time it takes to do something and then we rationalize doing it later because “I don’t have the time to do it right now”. In reality however, the task usually just takes 10 or 15 minutes or less!

Cleaning and organizing the kitchen corner cabinet turntable  thingy took me 30 minutes total. Cleaning the bottom of the KCCTT took me most of the time. One of the reasons I’m decluttering is to make cleaning easier – the KCCTT gets a good cleaning, if lucky, twice a year. So scrubbing the bottom took a good chunk of that 30 minutes.

But look how much nicer it looks now: 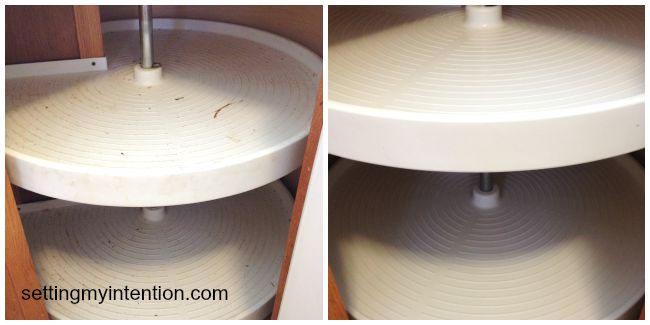 Do you have problems throwing food away – even when it only cost a few dollars?

Linking to these fun and fabulous parties: Monday Madness, Merry Monday, Two Uses Tuesday, Hit Me With Your Best Shot