You are here: Home / In Relationships / Y.O.L.O: You Only Live Once

My sons are 13, 11, and 5 years old. They love to shout, Y.O.L.O and other phrases that I am usually clueless about. It generally irritates me because they say it in response to everything.

Recently though, I realized that my sons offer me daily wisdom in how to approach life through their sassy retorts. They don’t realize that they’re offering bits of wisdom. They’re just doing their thing, being their genuine selves. 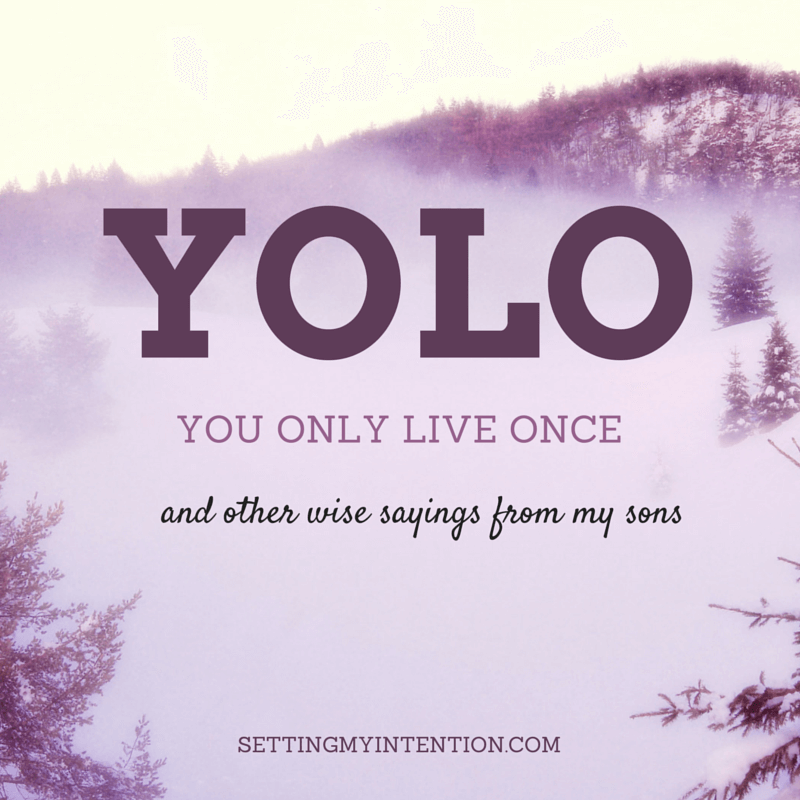 Y.O.L.O: You Only live once

My 13-year-old son’s favorite thing to say is “You only live once!” aka “YOLO!”. It used to irk me because he says it in response to almost every question or statement addressed to him. However, I’m starting to appreciate the sentiment behind the seemingly flippant statement.

My son usually says it with a shrug in response to a correction or suggestion about how he could have handled things differently. I’m starting to appreciate his lightheartedness towards life, and his ability to let mistakes roll off his back. He’s willing to try new things and doesn’t worry about how it turns out. He doesn’t beat himself up for doing the wrong thing or saying the wrong thing, he accepts the results and moves on.

Me:  “Your room needs a 5 minute pick up today”

My son, with incredulous look on his face, “What! ANGTFT Mom!”

My first instinct is to correct him, but I’m beginning to recognize the beauty in that response. My son usually has a plan for the day the night before – he is clear on what he wants to do, when he wants to do it. His passion and enthusiasm about his schedule is admirable.

How many times do I put my personal top priorities at the start of the day’s schedules? Do I pursue my passions with such unswerving determination?

Today was the BEST DAY EVER!

My 5-year-old son never ceases to amaze me with his energy and positivity. He will frequently run to greet me at the door with a big hug and state, “Today was the BEST DAY EVER!”

He hasn’t just returned from Disney World, or even the local children’s museum. He has just spent time with a loved one, frequently doing very simple activities. He could have been with his grandmother visiting the local pool, or with his dad in the yard building a makeshift fort with salvaged wood. He could have been with me, baking a batch of cookies. After each of those days, he will exclaim with the same amount of enthusiasm that “Today was the BEST DAY EVER!”

He has an innate sense of gratitude which is renewed daily. Whether he realizes or not, he values relationships over things. His joy when receiving new toys is never matched by the enthusiasm he shows after spending time with his loved ones.

Can I say the same thing about myself? Is my sense of gratitude and joy renewed every day by simple pleasures and relationships?

What about you? What have you learned from the everyday sayings of children?