You are here: Home / At Home / Meal Planning / Menu Planning Fears? Here’s How to Overcome Them!

Hey friends! I’m excited for you to hear from my friend Abby at Winstead Wandering. She has some simple, delicious recipes on her site that you should definitely check out and try! My kids are crazy about her chicken taquitos. 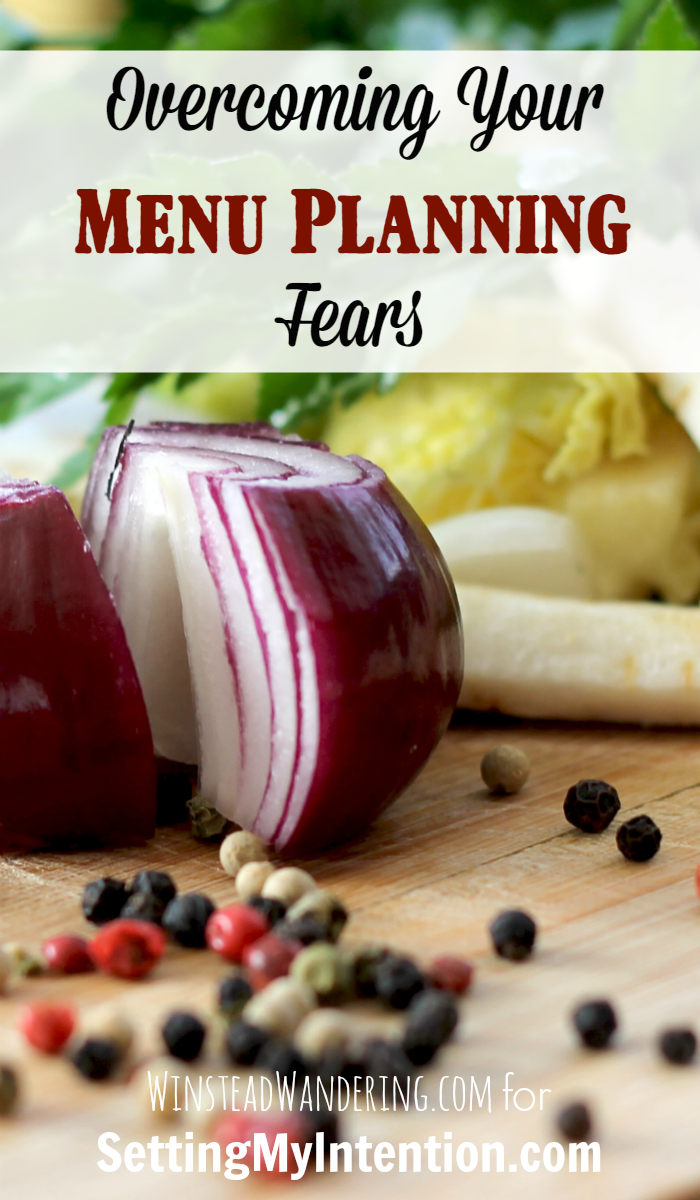 That got me thinking. As someone who has menu planned in one form or another for many years, I can’t quite imagine what it would be like not to do it. Even during phases when I don’t get a month at a time planned, I still plan by the week. Knowing what we’ll be having for supper each night is one less thing to worry about, and it’s something I highly recommend to pretty much everyone.

So why isn’t everyone doing it? Of course menu planning isn’t right for every person, but I don’t think that’s what’s holding people back. If I had to guess, I’d say what’s holding them back is various fears. Fears that, in my opinion, are largely unfounded.

How to overcome Your Menu Planning Fears

“I don’t know what we’ll be doing a month from now.”

Just because I menu plan one month at a time doesn’t mean that makes sense for everyone. Figure out what will work best for you and your family; maybe it’s one week at a time, maybe it’s two, or maybe you’re ready to dive in and try to make the month-long thing work. Just be realistic and decide on a length of time that won’t leave you feeling overwhelmed before you even get started.

“We just eat the same foods over and over.”

Your family probably has a few meals they eat much more often than any others. Make a list of what those meals are for you. You’ll probably come up with three to five options, and they’ll likely use ingredients you regularly keep on hand. If you decided to plan one week at a time, and if you add in a night for eating out and a night for leftovers, you’re done!

If part of what intimidates you most about making a menu plan is finding new meals to try, just skip that part. Stick with your family’s tried-and-true favorites. Later, when you feel more confident, you can add in new recipes. If you think you don’t need to make a menu because you prepare the same several meals over and over again, I challenge you to give it a try and see how much easier it makes your life.

Some months menu planning takes longer than other months. Mostly, it depends on how many new meals I decide to try and how many nights are already decided for us. Sometimes I can plan the month in about 20 minutes, other times it takes an hour or more. I know a lot of moms don’t have that kind of time to sit down to make a plan, but I beg you to think it through.

I promise you, setting aside 20 or 45 or 60 minutes will more than “pay” for itself in time saved each evening, not to mention money saved by not ordering takeout and by having a plan for every item you buy at the grocery store.

“What if we don’t want to eat what we planned?”

One of the comments I get most often is along these lines: people are worried their family won’t want to eat the meal they planned for a certain night. You’re the boss here, though. If you don’t feel like eating or making the recipe you intended, just swap it out with something else on the menu. I do this frequently. As long as you don’t end up wasting ingredients you didn’t get around to using, you’re good.

Whatever your reason for saying no to menu planning, I urge you to give it a shot. After one try, the time, effort, and money you save will make you a convert for life. What are your reasons for not menu planning?

This post will be shared at these awesome link ups.