You are here: Home / At Home / Decluttering Your Home / 5 Steps to Tidying Children’s Bedrooms

If your kids’ bedrooms look like a bomb went off in there, you are not alone. We’ve decluttered a lot of extra toys in my sons’ bedrooms which helps a ton. I’m realizing though that they need to know how to tidy up their rooms. In order to make it really easy for them, we broke it down to 5 steps. Here are 5 steps to tidying children’s bedrooms.

We recently returned our Malm dressers from Ikea that were on recall and thought this was the perfect opportunity to downsize and get dressers that would better serve our current needs. We returned the dressers and got store credit, but I was totally stumped about which dressers to get. Because I waited, my two older sons didn’t have their usual shared dresser and their rooms were in worse shape than usual. Clothes were all over the place.

Here is a before pictures: 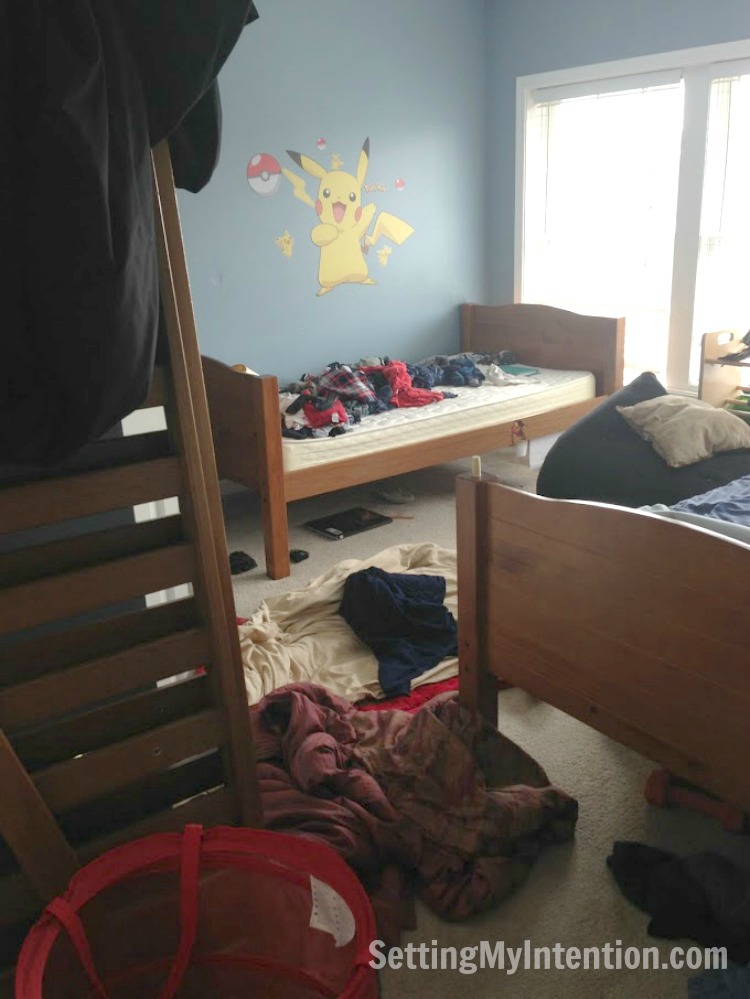 The bed being used as a dresser instead of sleeping!

After they finally chose and assembled the dressers, we took this opportunity to clean, organize, and rearrange the two bedrooms that my three sons share. They originally thought that they would all share one large bedroom, but my oldest decided he’d like a bedroom to himself, and I wanted to honor his need for privacy.

We had done some massive decluttering of the boys’ toys and bedrooms over a year ago. It was one of the first things I did when I started decluttering our home. This time, it was mostly a matter of picking up, cleaning, and organizing things so they have a home. 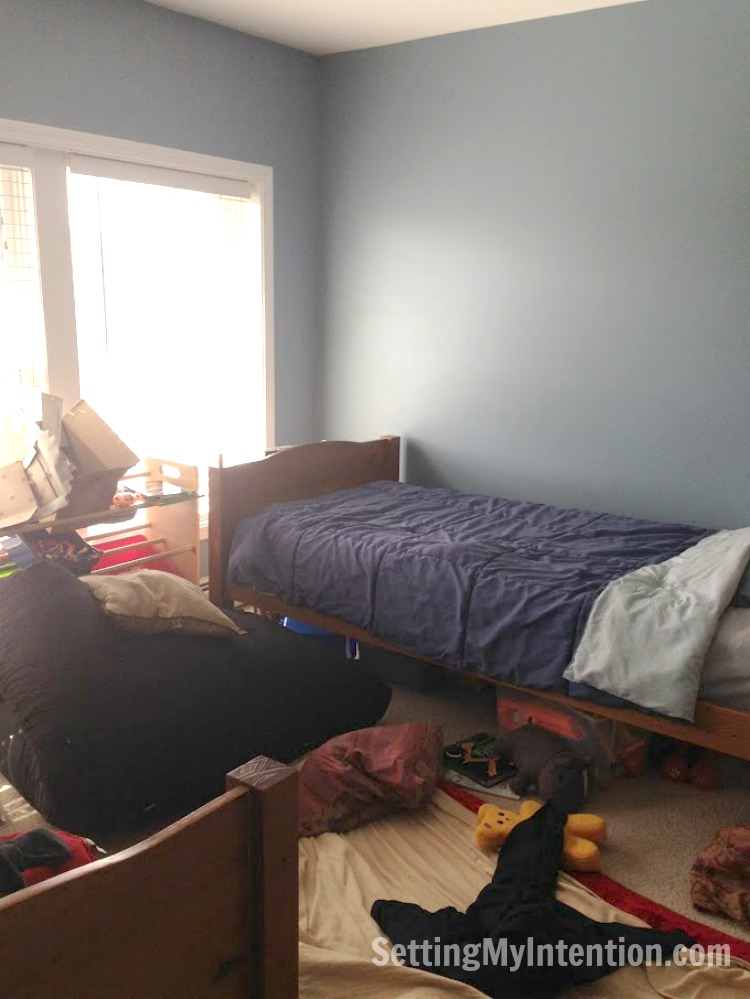 It’s always surprising to me that my kids don’t realize that their rooms need a pick up. They seem immune to messes, and happy to walk over or around piles of clothes and toys. They’re getting older though, and it’s really important to me that they get in the habit of tidying their sleeping spaces. I realized that the process can be broken down into five easy steps that they can do independently with practice…and a little nagging!

This may require dumping a bunch of items on to the floor. That’s okay. For my middle son, that required putting his clothes in his new dresser. He would have just shoved all the clothes in the new dresser without looking at them if left to do it on his own. I took advantage of this opportunity to ask him to take out the clothes that he knows he won’t wear. 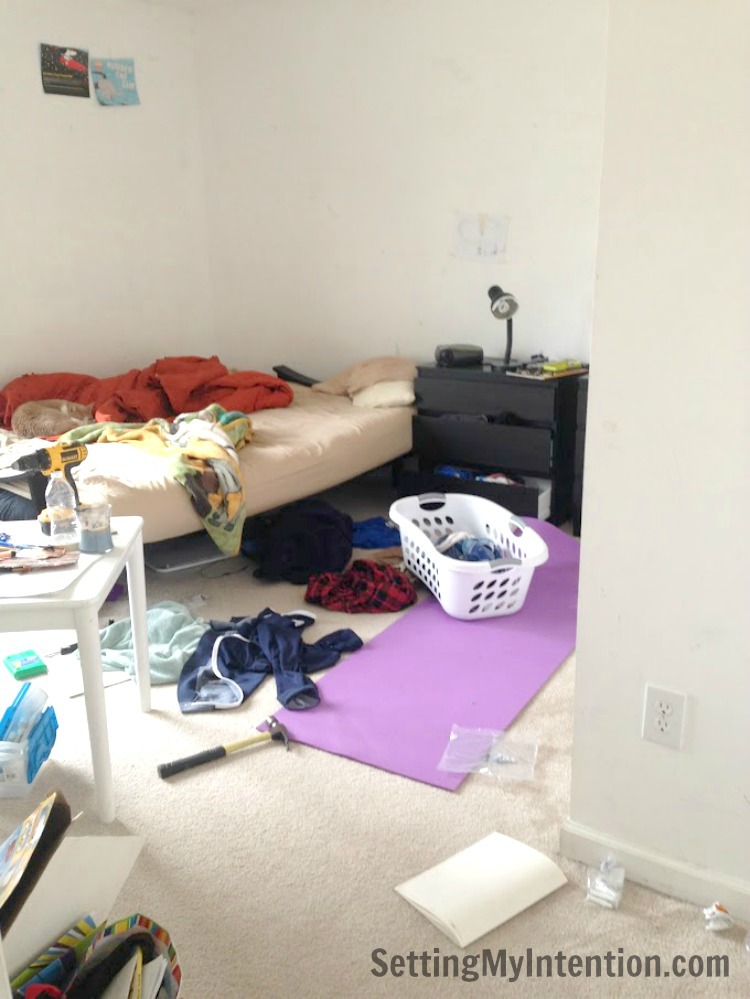 For my older son, his bed wasn’t cluttered because most of his clothes are on the floor already! It was only a matter of straightening out his comforter and pillow.

Step 2: Pick up all the clothes off the floor.

We usually have a laundry basket nearby – the question is always – “are these clothes clean or dirty?” My older sons do their own laundry, but don’t seem to value putting their clothes away in their dresser. They argue with me that “they’re just going to get worn again – why bother putting them away?”

I still need to direct them to:

I’m hoping this will become more of a habit for them as we do regular weekly pick ups. Once the clothes and blankets are picked up off the floor, you’ll notice an immediate difference!

My sons are constantly drawing and making things out of paper. They do some incredible drawings, but they don’t necessarily want to keep them. They just don’t regularly go through the drawings unless we do it together. 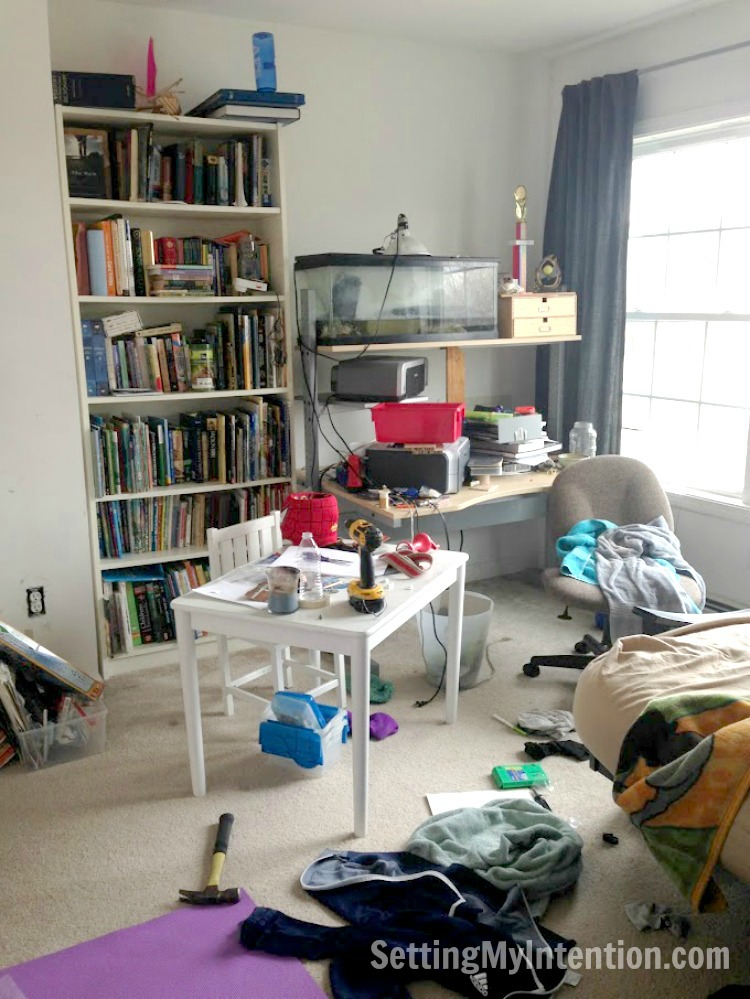 I took everything off of the desks in this room and put it on the floor.

The small desk and large desk were in desperate need of a good wipe down. It’s rare that the surfaces are clear so we gave them each a good cleaning.

Step 5: Sort through all the items and return them to their homes.

We did a lot of sorting in the desk area – papers, marker, pens, and small toys. We made piles of all the drawings, books that needed to be put back into the bookshelf, and throwing all the garbage away from the recent dresser assembling.

We threw away things that were broken, dried up markers and pens, and put the legos and other small toys away in their bins.

We returned tools to the basement.

My youngest son and I went through the books in the bookshelf and picked out 30 books to donate. In the process, he rediscovered ones he wanted to re-read.

The after photos remind me what is possible and achievable. It reminds me to take small actions every day to teach my sons how to tidy up on their own so that next time the task can be done in 5 minutes or less. 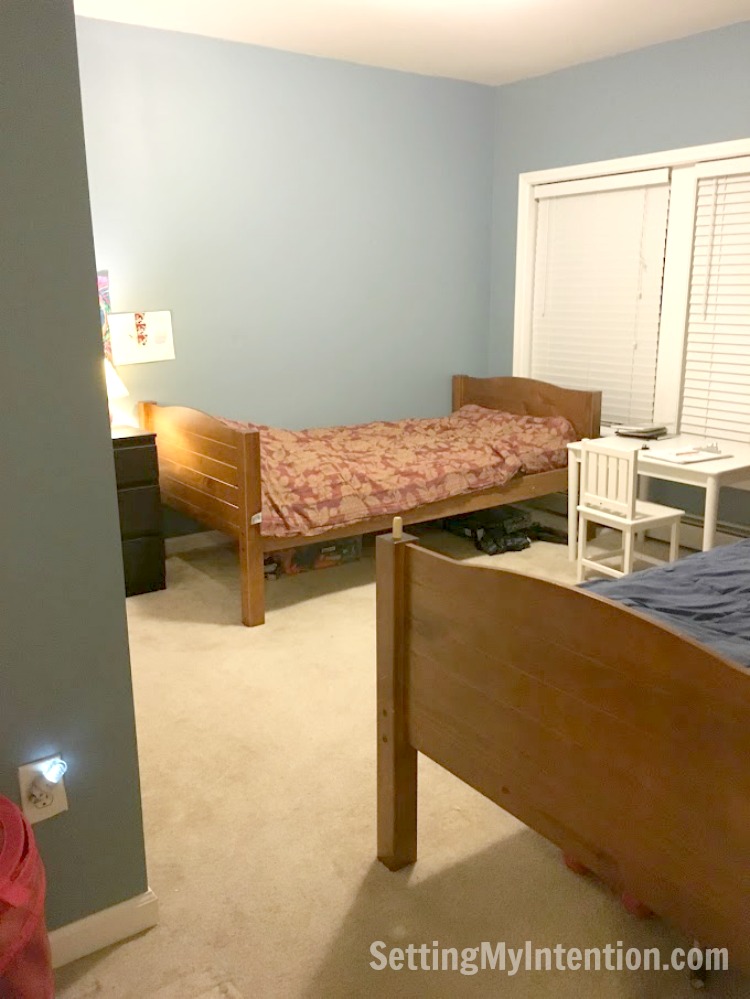 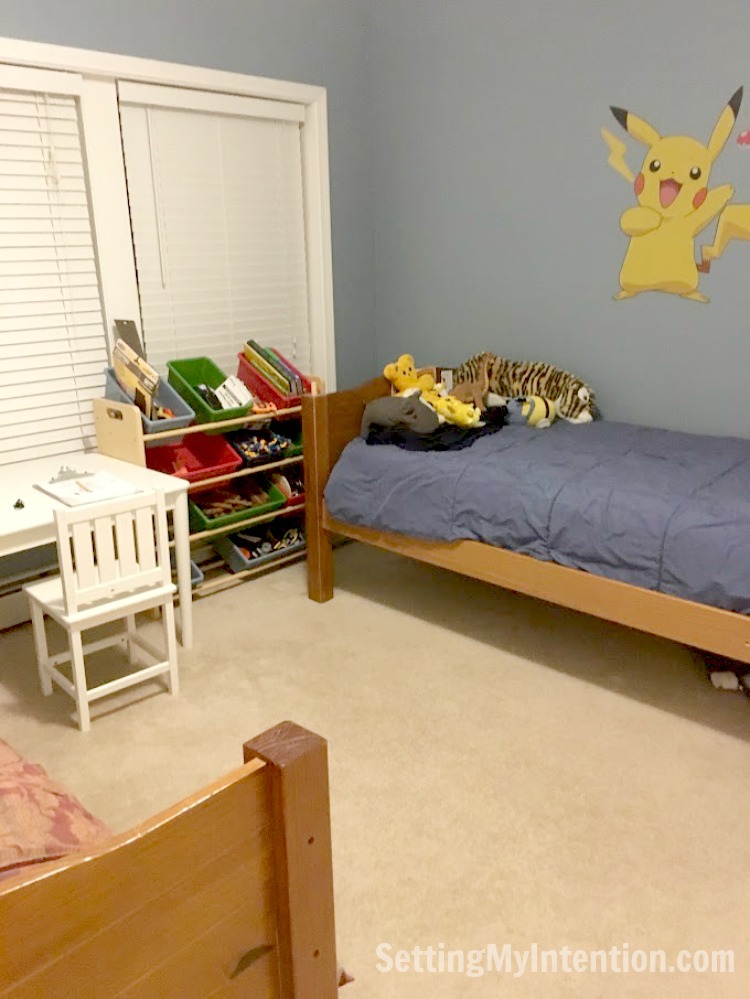 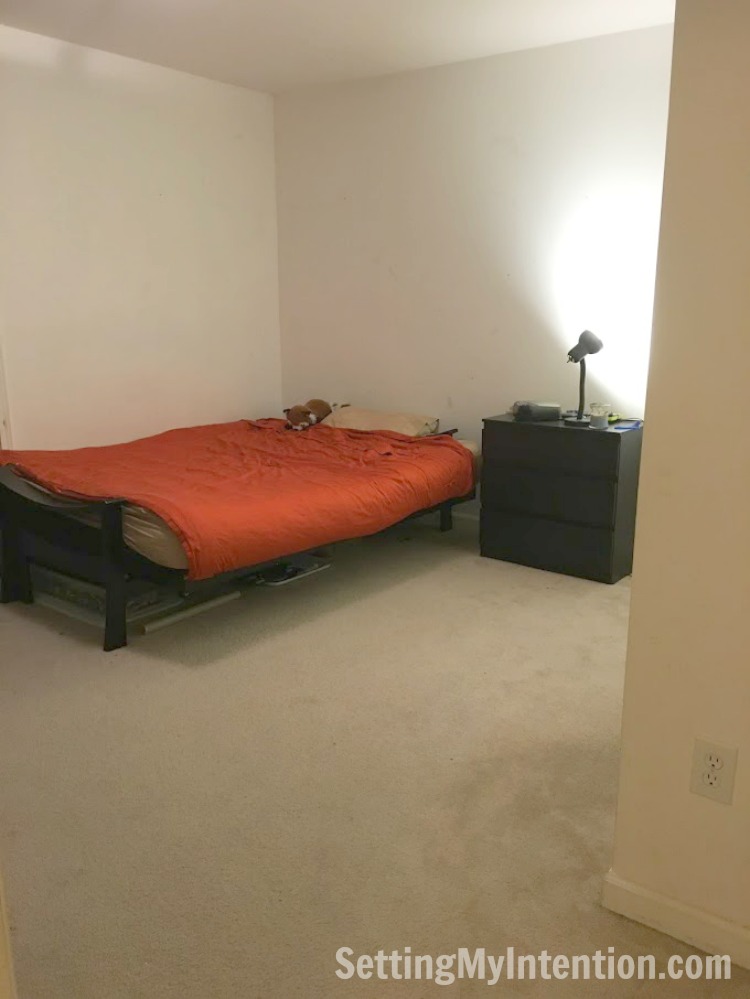 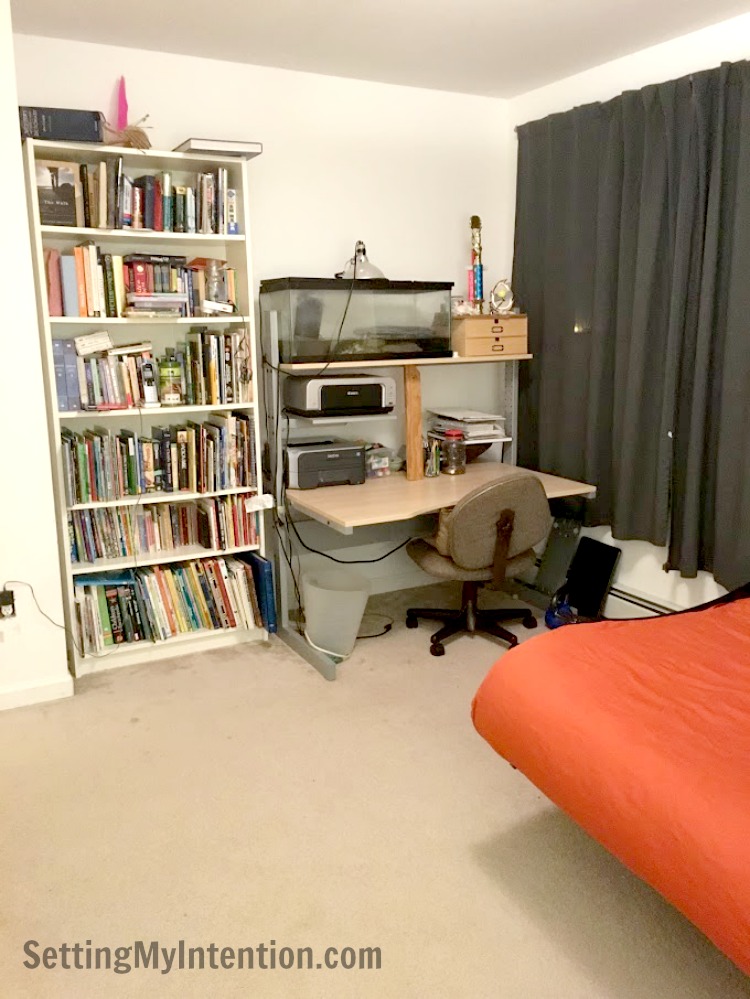 I asked my sons’ how they felt now that the rooms were cleaned. My oldest exclaimed jokingly, “Terrible! I can’t find anything now!” My kids don’t verbalize that they love having a clutter free room, but their actions speak louder than words. Since tidying, they’ve been playing in their rooms for longer periods of time together and alone.

Before and After Photos 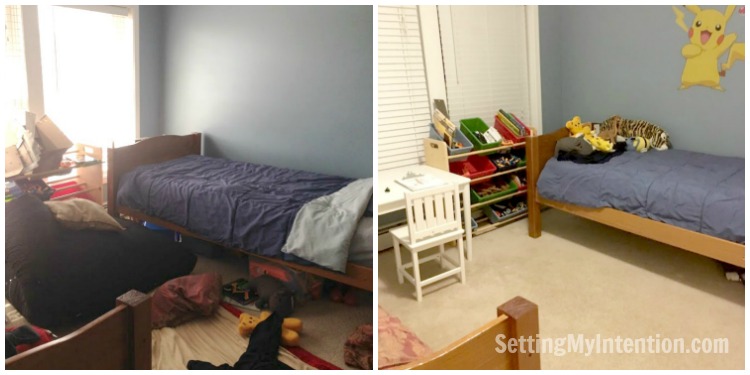 We removed a futon from this room that wasn’t being used. One of my sons has taken to sleeping on the floor, but I’m hoping that now that the bunk beds are separated he’ll sleep on the bed! 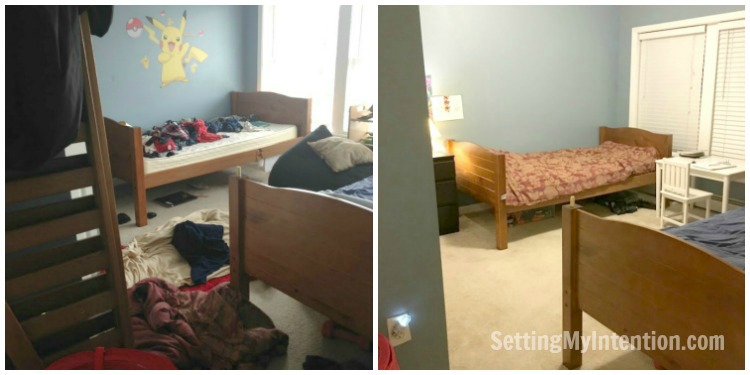 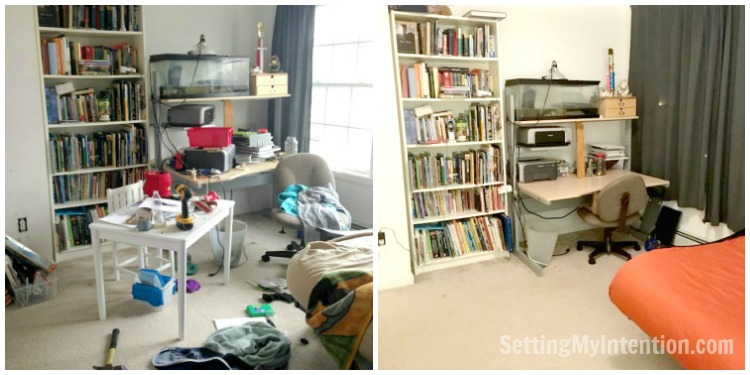 Now both desks can be used now that they’re clear! 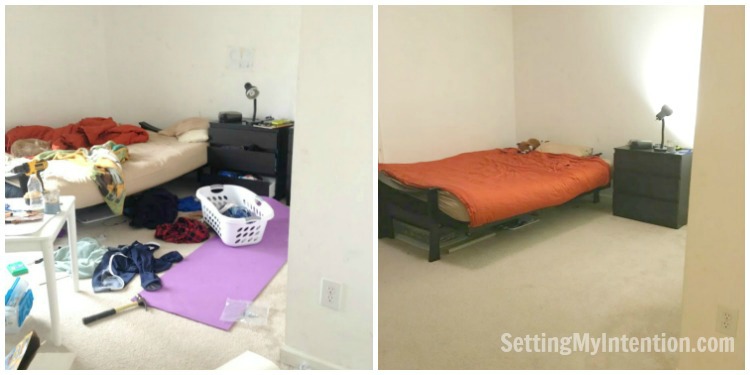 What steps have you taken to teach your kids how to tidy their bedrooms? I’d love to know!

This post will be shared at the following link-ups.