You are here: Home / At Home / Decluttering Your Home / MinsgameBOSS Week Four

Have you been participating or following along during the 30 day MinsgameBOSS challenge in November? I’ve been really encouraged by the Facebook Group that participants are posting on daily. Many people have commented that they might consider doing the minsgame next month or in January. I think that’s a great idea – do it with a friend and help keep each other accountable. We’re in the home stretch – Week 4! Here’s a recap of Week 3. 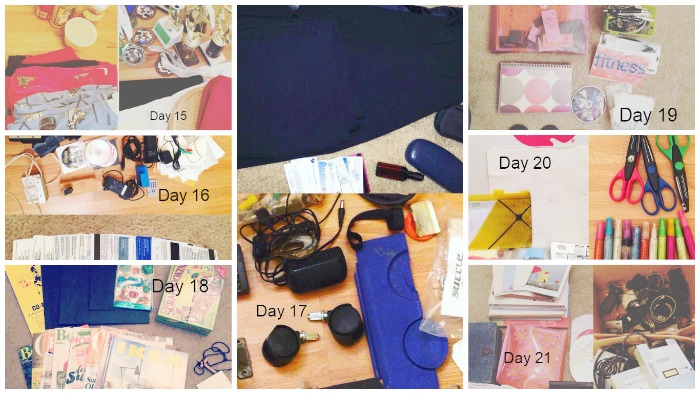 As the numbers get higher in this challenge, the daily goal is becoming a group effort. For example, for Day 15, my sons decided to contribute a lot of their soccer trophies and chess medals. This made up the bulk of the daily goal of 15 items. They decided to keep the most special of the trophies and gave up the rest. I was really proud of them because they had not wanted to give up any of their trophies or medals several months ago.

This week has motivated me to finally stop ignoring the pile of the old insurance cards and expired credit cards. I finally sat down and started cutting them up. It’s tedious and a little difficult cutting those up, which is why I’ve been ignoring them!

Someone from the MinsgameBOSS Facebook group suggested shredding them. I have a little shredder that I thought was dead back when I was taming my paper pile. It turns out it wasn’t dead! It did work to shred the insurance cards in my little shredder. Unfortunately, now I’ve jammed it with a credit card! I’m hoping I can somehow figure out how to “unjam” it.

Do you have little things you can #declutter today before they turn into big projects? #minsgameBOSS, #minsgame Click To Tweet

Two major victories from this week:

He reduced the 4 boxes of wires down to 2. Most of the box that was sitting outside our bedroom was garbage as well. Reducing the wires was a big job. He admitted that it would have been so much easier to test the wires in smaller batches as he was adding to his collection. We’re all learning that it’s easier to take action on items immediately rather than ignoring them until it turns into a big project.

What lessons are you learning as you declutter?

This post will be shared at these great link ups.